Gabriel Kogan is an architect, filmmaker, and educator based in São Paulo, Brazil. He is currently pursuing his PhD, which focuses on SESC Pompéia and its architect, Lina Bo Bardi. SESC Pompéia is just one venue in the wider SESC network, which was founded in the mid-twentieth century as a healthcare provider for service sector workers. It has since evolved to include other functions, such as sports activities, cultural programs, and festivals. There are over forty SESC venues, ranging from very rustic to state-of-the-art.

As Kogan put it, Bo Bardi designed the place as “a day,” with a restaurant that serves affordable and delicious food, as well as concert spaces, a theater, a library, a game room, dance spaces, and most importantly, in Kogan’s opinion, “the open space that [functions] like a lounge. People just go there to read a book, to chat with friends…there are old people that go there just to have access to newspapers.” Kogan’s favorite event at SESC Pompéia is the weekly ballroom dancing event for elderly folks, which he has attended as a spectator many times. 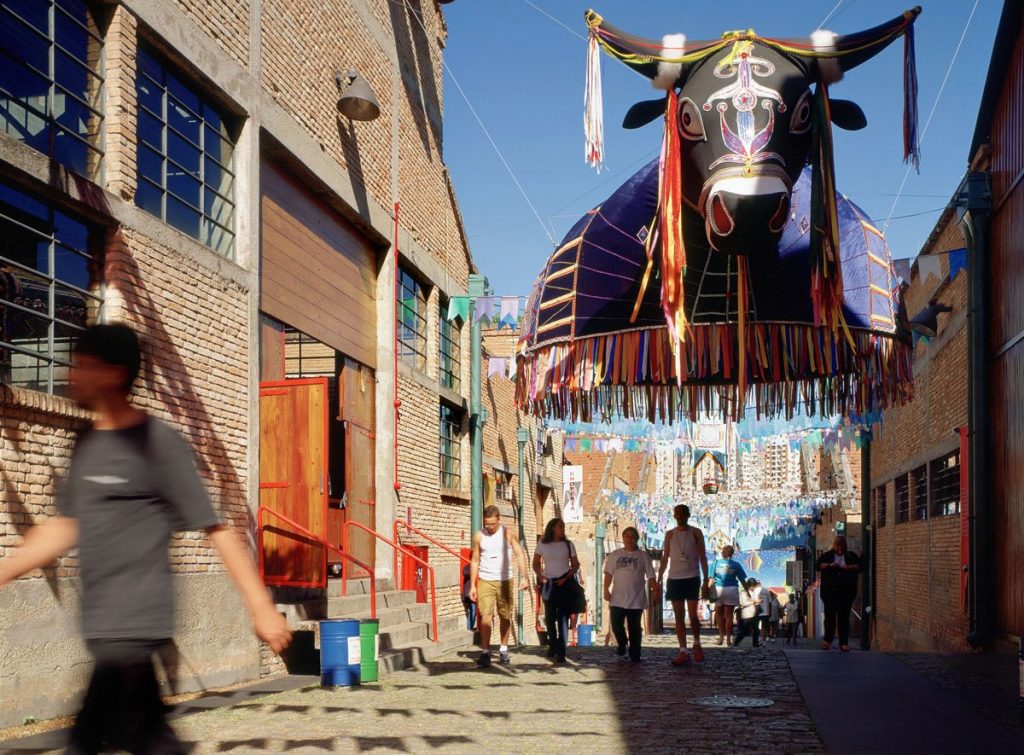 Visitors walk through one of SESC Pompeia’s interior streets, decorated for a festival.

Kogan takes us for a brief dive into the history of the SESC Pompéia buildings, noting that Lina Bo Bardi wanted to subvert the typical notion of cultural centers by designing something “ugly”—more endearing and approachable than chic.

Kogan thinks that one of the central lessons we can take from SESC Pompéia is that the quality of the design process is reflected in the building. Bo Bardi transferred her office to the construction site and worked extensively with engineers and workers to horizontalize the process. In Kogan’s words it was, “a beautiful construction process resulted in a beautiful project.” While the SESC Pompéia complex is welcoming to people who want to relax and hang out, Kogan tells us that SESC users often go with a particular purpose, which may have to do with the fact that it is not very easily accessible by public transportation.

Another key lesson Kogan has taken from the wider SESC organization is that there are advantages and potential pitfalls in being a networked entity. On the one hand, the SESC network allows performers booking shows to springboard between multiple venues, as SESC can synchronize programming. On the other hand, the networked format has also led to a semi-corporate structure bogged down by the typical bureaucratic machinations of a large organization. In this respect, Kogan feels that there is some work to be done to streamline operations and allow for a more informal, user-controlled feel. Furthermore, he sees an untapped opportunity in the education services SESC provides. For now, it is mostly in the vein of after-school clubs, but Kogan hopes that SESC Pompéia will one day expand its services to include a public school. 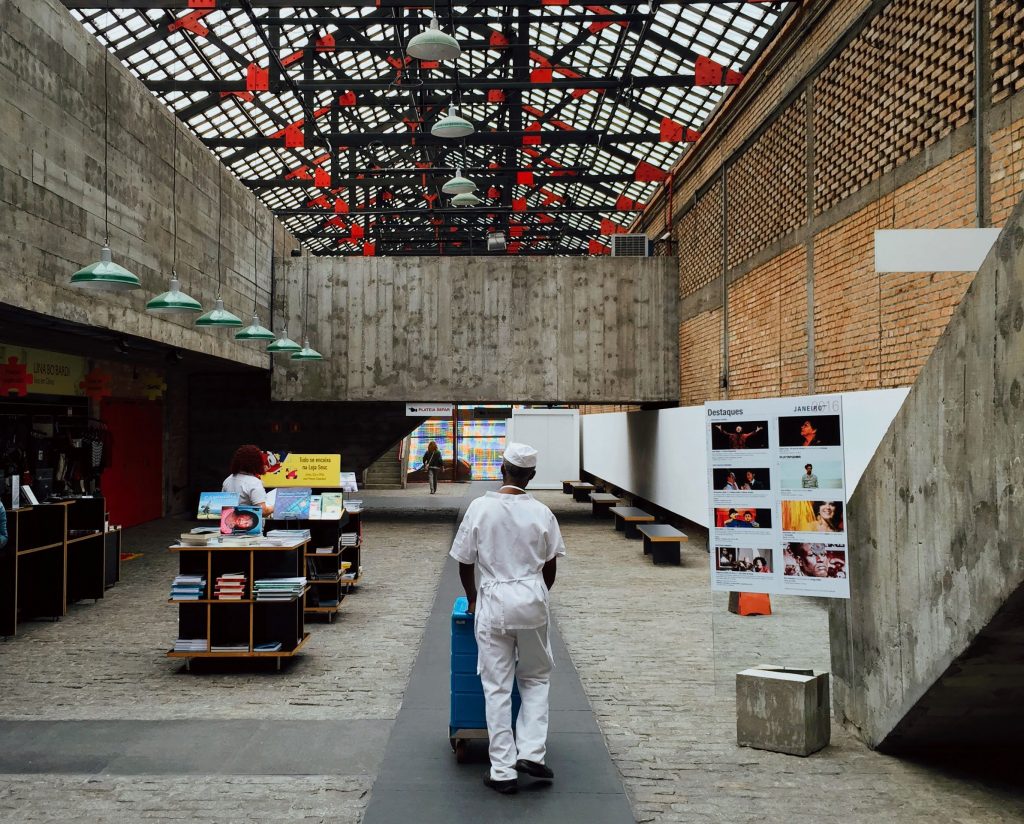 An interior space at SESC Pompeia with small retail shop on the left side.

For this conversation in our The Future of Cultural Centers   dialogue series, we spoke with Gabriel Kogan, an architect, critic and filmmaker based in Sao Paulo, Brazil. He is a PhD candidate at the University of São Paulo (School of Architecture and Urban Planning, FAU-USP) and a professor at Escola da Cidade (history and architecture theory). Since 2015, Kogan has been a guest lecturer and teaching assistant at Politecnico Milano. His main research and teaching areas include modern and contemporary architectural theory, especially on Brazil and Japan.

SESC Pompéia is a remarkable adaptive reuse project based in São Paolo, Brazil and developed by one of Modernism’s best-known female architects, Lina Bo Bardi. Originally a drum factory, Bo Bardi transformed the structure into a highly successful multi-purpose building by adding two concrete towers connected by diagonal walkways. The building is a unique, hybrid cultural space that provides members with a diverse mix of services, from athletic facilities, and swimming pools, to community classroom gallery and exhibition spaces.
Find Gabriel Kogan on social media:
Twitter | Instagram | LinkedIn
BACK TO TOP ↑