Might it be too much to start with the word “love”… too cliché to begin with the words of Dr. Martin Luther King Jr.? Well, I will still offer the paradigm below.

In a speech to my alma mater, Bowdoin College, in May of 1964, Martin Luther King Jr. lamented that, in the English language, there is only one word for “love,” while in Greek there are three. We know amicable love, fileo—one of reciprocal friendship that endures in the most difficult of times. The second is most familiar in name—that of eros, romantic partnership with an individual with whom we wish to build a life and/or family. The third, agape, is less describable, less tangible of an exchange as it transcends aesthetic, interpersonal, or romantic love, and, instead, equates to a love with our world—the ways in which we are in relationship with our surroundings and the people around us.

We all innately understand what this means—what this feels like—even though we may not carry the proper language to describe such existence in “love.” It is the love that fills us just by being in the world, while open and vulnerable to the information our surroundings offer us. This is found in every exchange on the corner, block, neighborhood, city… however close you wish to zoom in or out. And to be clear, it is a fulfillment that is not prescribed solely by joy, but also with discomfort. It is a love which allows for all the complexity of life to fill us with a realization of wonder—that which we thought we once knew is unfixed and, therefore, always changing.

To apply this third love to institutional behavior may seem like a lofty, if not foolish, task. But, let me propose an attempt with the following framing question: What would it look and feel like for an institution to be in community rather than purporting to serve community? 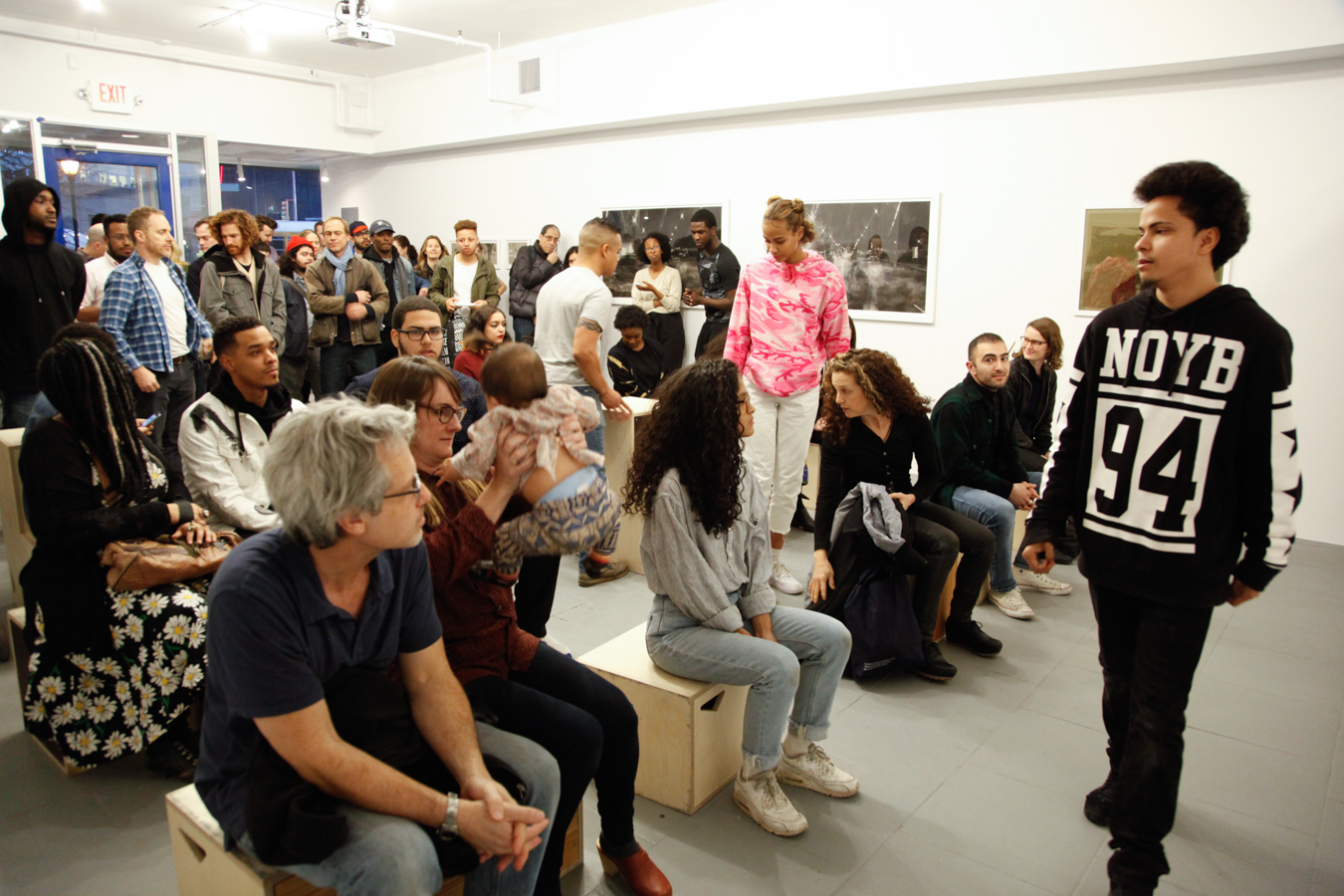 To do so would mean to see the cultural institution as only part of a larger ecosystem, rather than the progenitor of all things brilliant and worthy—outside of a settler mentality in other words. An ecosystem flourishes only when each part of the whole sees itself as a component of a working mechanism and, therefore, each other as necessary. This approach would maintain that the institution is only upheld while in partnership to achieve something greater than all the community’s parts. It requires that an institution approach a relationship with openness. That which you know may not be the only way to perceive things and that which you do not know, you cannot know, and, therefore, must be open to receiving.

Yes, let’s be more precise. If we investigate this concept through what a museum would codify as public programming or community engagement, we get closer to the manner in which the institution performs its hierarchy—its imposition of knowledge and perfectionism. So often, the rhythm, scope, texture, and output of a program is predetermined by prescribed modalities and detrimental notions of success; both ultimately driven by budget. The result is a failure of relationship building, where the values of the exchange remain transactional, or worse, extractive. The parts of the whole are not met as collaborators—agents of their own participation. As collaborators, these parts would, instead, collectively determine the flow and output of the exchange, allowing for evolving outcomes.

To be in community, then, prioritizes existence among its members, thereby centering the wellbeing of the participants in the ecosystem. And, yes, this must include the minds, bodies, and psyches of the black and brown practitioners who largely populate the museum education and community engagement departments.

Let’s speak clearly of what prevents this mode of experimentation and belonging in community. Resistance to relationship building is not simply the result of bureaucratic barriers and antiquated methodologies. It is a mode of operation that deliberately distances the institution, and those within, from its own communities. It is the distance created by a service model that continuously reinforces structures of harm. Because, to focus on product disavows people and the closeness required to be in relationship. For many institutions, we are speaking of their black and brown neighbors. And, for museums, this is inclusive of the artists they purport to serve. We must also speak of the BIPOC educators that are so often asked/required to be the face of relationships with surrounding communities, preserving this distance, while not being held with care themselves. And this mode of operation is consciously and unconsciously embedded in the culture of the institution. White cultural supremacy persists in its need for exactness—a fixed notion of correctness only compounded by a colonial inheritance, which bestows upon those with power the “right” to dictate what is important and true. 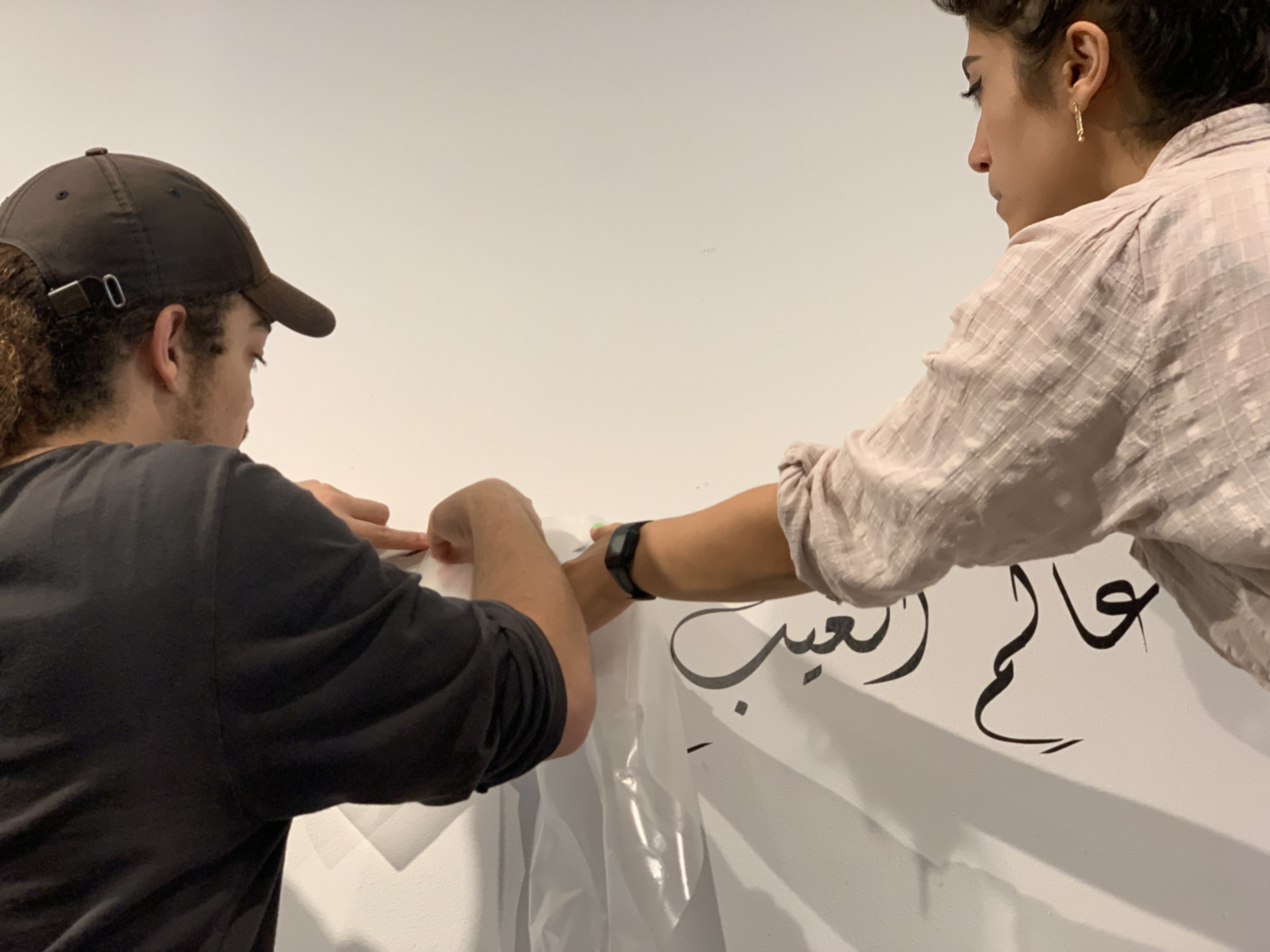 Artist Maryam Monalisa Gharavi works with Assembly Print Shop Apprentice Saint to install a floor to ceiling vinyl that reads, عالم الغيب والشهادة, in Arabic. (image 7139). The phrase, عالم الغيب والشهادة, translates roughly as, “The Knower of the Unseen and Seen.” Artist-in-residence Maryam Monalisa Gharavi used these words, which appear a total of ten times in the Quran, as the basis for a vinyl work she’s created here at Recess.

A break with this practice of exactness would require something radical. Why not return to a proposition of love? But again “love” in this sense welcomes the messiness—the discomfort of being in relationship with the un-fixedness and the constant learning that invites each part of the whole to consistently analyze their work, contributions, and, most importantly, implicate themselves in failure. Ahhh…now we’ve arrived at the real difficulty for cultural institutions. For a museum to implicate itself in failure would require humility.

This year, I joined Recess as Co-Director under the belief that a key element of reimagining and changing organizational operations is to revise leadership models. Since its inception, Recess has been guided and led by artists. And, for Allison Weisberg, Founder and Co-Director, the team, and I, it made sense to recognize artist-led leadership and name it in the same way executive leadership is named. It is our hope that, in turn, our organization can function like an artist collective rather than a corporate entity. The organization emulates an artist’s practice by being an engine of revision and imaginative expansion, in which our connection to community—both inside and outside our walls—is grounded in principles of mutual care, ethics, and basic human decency.

Throughout the organization, we encourage one another to ask the most difficult questions to see our way toward solutions that will impact the ecosystem of which we are a part. We look inward and examine our unique DNA and consider who is at our table, examine our skill sets, and map our assets to decipher how to make our organization more accountable to our workers, community, and the industry at large. One example of this is the development of support circles—fostering a robust community centered on around care for artists. The support circles for each incoming artist are structured to assist them with actionable resources before, during, and after their residency. Stretching the trajectory of collaboration and communication fortifies a bond between artists and Recess that nourishes the individuals and communities with which we come into contact. Physical and mental health options, legal assistance, and increased financial support are just some of the offerings within the institution-wide asset portfolio that will be made available to our artists. In these support circles, each artist is offered the aid of board members themselves, members of our youth community, writers, and industry advisors.

Most importantly, we arrive at each support circle without “exactness,” but with an openness to be in relationship and to reach fulfillment through exchange. As MLK offered, this is a redemptive love. It is a desire to see community—and all of its messiness—as the very thing that provides sustenance and wonder.

Shaun Leonardo’s multidisciplinary work negotiates societal expectations surrounding manhood—namely, the definitions surrounding black and brown masculinities, along with notions of achievement, collective identity, and experience of failure. His performance practice, anchored by his work in Assembly—a diversion program for court-involved youth at the Brooklyn-based, arts nonprofit Recess—is participatory and invested in a process of embodiment. Leonardo is a Brooklyn-based artist from Queens, New York City. He received his MFA from the San Francisco Art Institute, is a recipient of support from Creative Capital, Guggenheim Social Practice, Art for Justice, and A Blade of Grass, and was recently profiled by The New York Times and CNN. His work has been featured at The Guggenheim Museum, the High Line, and New Museum, with a solo exhibition, The Breath of Empty Space, recently presented at MICA and MASS MoCA, and currently at The Bronx Museum. Starting in 2021, Leonardo joins Recess as Co-Director, helping guide the organization’s continuous evolution as an engine of social change.