In the laundry list of things that have been made abruptly and indefinitely worse by the COVID-19 pandemic, is the unmistakable spike in reports of anxiety and depression in the United States, according to recent studies. The stress caused by the current pandemic and the cascade of effects that it has unleashed is devastating, especially within the context of an already mounting gap between populational demand for mental healthcare and the availability of care. In other words, coronavirus just turned bad into worse. A recent UN policy brief puts the situation in stark terms: there is no recovery from COVID-19 without robust support for mental health. 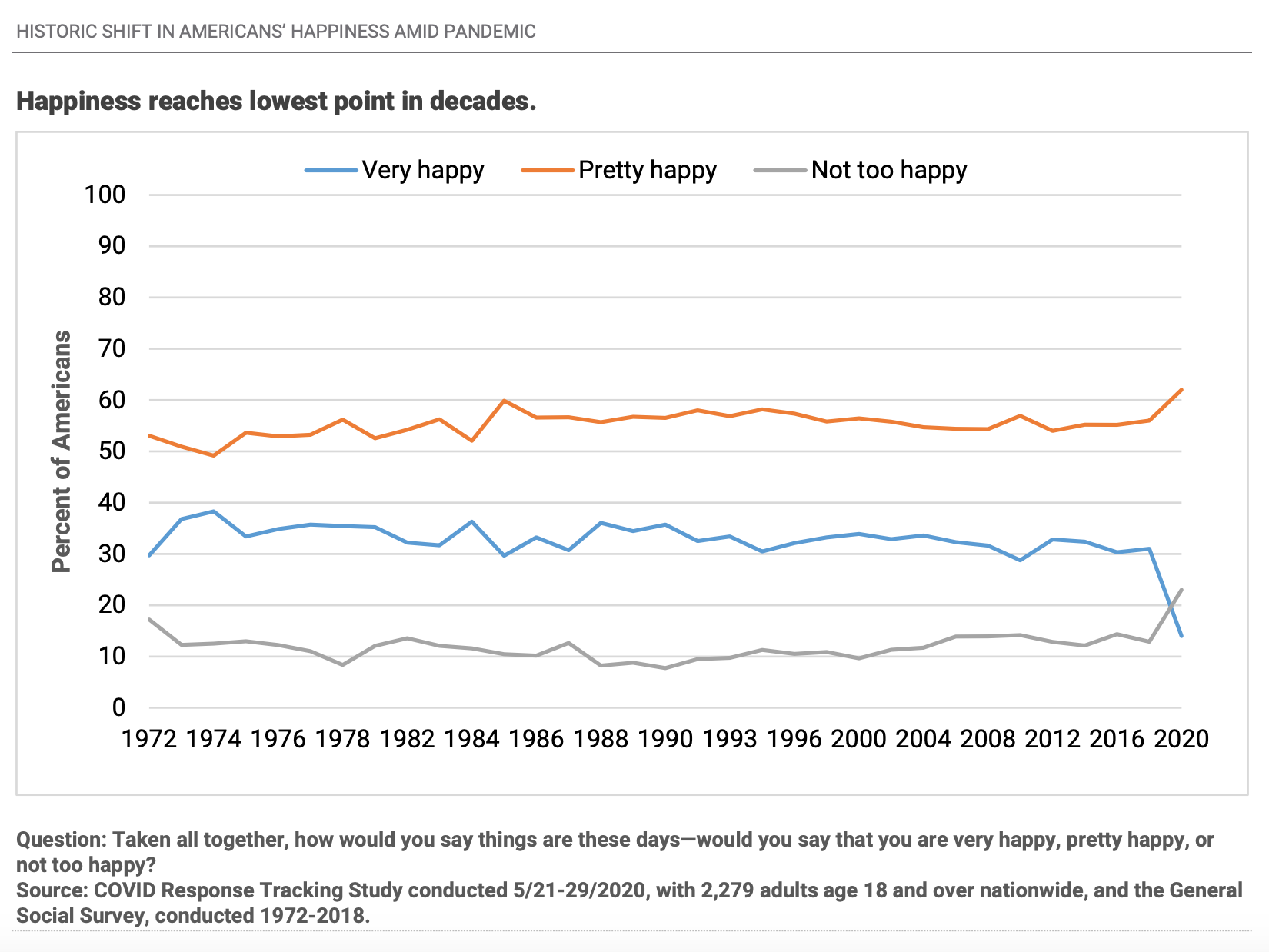 Happiness and Covid-19; Courtesy of NORC at the University of Chicago

Among the many driving forces behind our current mental health crisis are social stigma, high cost of living coupled with wages that lag behind inflation, digitally-mediated childhoods, prohibitively expensive mental healthcare, and the fear of forced institutionalization, incarceration or marginalization—the list goes on. We are certainly making some progress in terms of ameliorating the social stigma that surrounds mental health and mental illness. Yet, while people in younger generations tend to talk more openly about mental illness and are more accepting of people with mental illness than previous generations, the numbers are deeply concerning. Not only are Millennials and Gen Z facing higher rates of mental illness than previous generations, but, since 2000, youth suicides and suicide attempts have increased by a staggering 54% and 56%, respectively. Today, suicide is one of the ten leading causes of death across age groups.

Nearly 20% of adults live with a mental illness, but only 57% of those people actually receive treatment.

Promoting health of any kind involves communities and infrastructures beyond the healthcare system. A community’s mental health also relies on entities like local government, recreation centers, farmer’s markets and supermarkets, well-resourced schools, libraries, and cultural institutions. When it comes to supporting mental health, wider distribution of resources and knowledge strengthens communities and reduces unnecessary strain on our healthcare system by making sure people are cared for, not just when they are in crisis. This makes everyone safer. Current numbers suggest that nearly 20% of adults live with a mental illness, but only 57% of those people actually receive treatment. 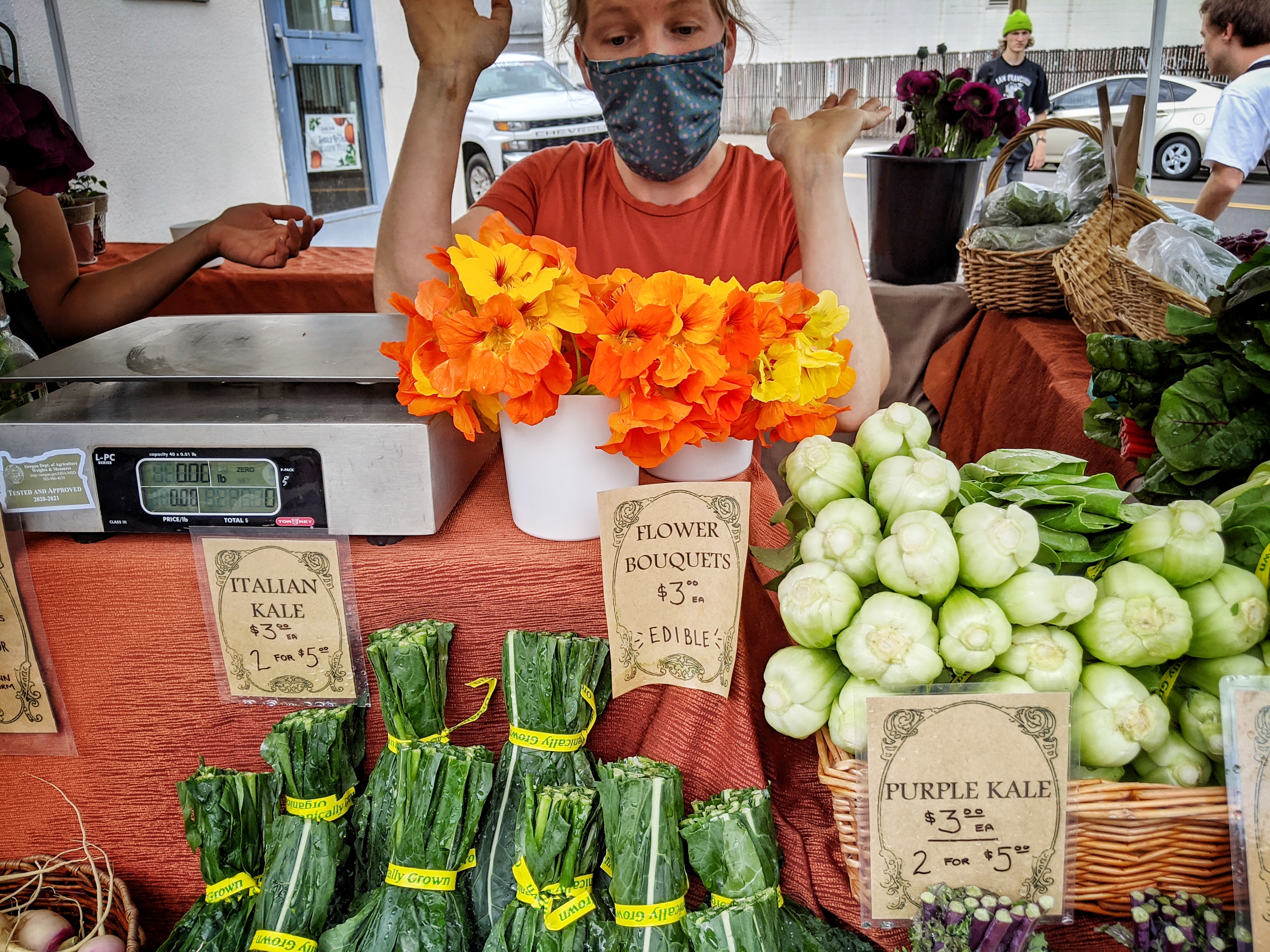 On the one hand we have an obvious gap between the demand for mental healthcare and what is being provided, while on the other we have a towering list of social and material realities that actively produce stress, grief, and anxiety, especially among marginalized groups. We cannot promote a deeper commitment to mental health if we do not also understand how the conversation around mental health is impacted by disparities in access to mental health care along racial lines, the distrust of healthcare institutions caused by discrimination and a long history of unethical human experimentation, the psychological impacts of racism, sexism, and other forms of identity-based violence, or the fact that doctors dismiss the pain experienced by Black patients at a higher rate than that of white patients, for example.

Around the world, and certainly in the United States, we effectively offload a whole slew of mental health functions onto the police and the criminal justice system, causing a lot of unnecessary harm in the process. In 2018, America’s prison population showed rates of serious mental illness three times higher than in the general population. For the last 50 years, America has waged its notorious “war on drugs” and put millions of people in prison for drug-related offenses, breaking up families and creating more poverty instead of investing those resources more humanely and effectively into healthcare and communities.

While it remains to be seen whether funding for mental health programs and healthcare will be more effectively addressed in federal and state policy, alternatives to the current system are emerging with force. Advocates in the American cities of New York City; Olympia, Washington; Denver, Colorado; Indianapolis, Indiana; and Portland, Oregon have relentlessly pushed for a network of crisis intervention teams comprised of medical professionals and EMTs who serve as first responders to mental health crises rather than police. 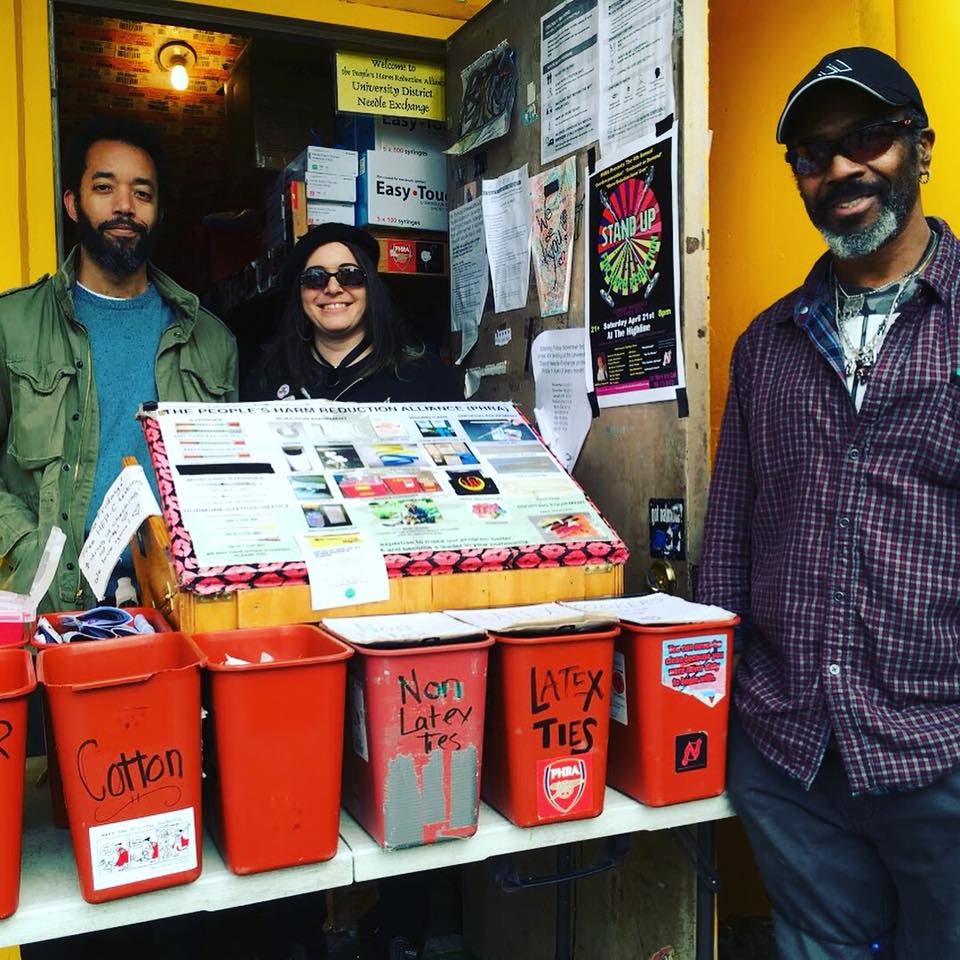 Considering community-based approaches to mental healthcare should be common sense.

Another promising approach to everyday mental healthcare comes from thinker and healthcare professional Dr. Vikram Patel, a world-renowned mental health researcher who is attempting to break down the barriers that unnecessarily leave so many people without the care they and their families urgently need. Patel is from India, where only 10% of people with mental illness receive care, so he sought out to reconceptualize mental healthcare in a framework he called the SUNDAR approach. SUNDAR (beautiful or enticing in Hindi) is an acronym: Simplify the messages we use to convey mental health issues, Unpack the interventions into more easily deliverable components, Deliver these interventions as close to people’s homes as possible, Available human resources from local communities deliver these interventions, and Re-allocate the scarce resource of mental health professionals to design and oversee programs, and supervise community health agents. 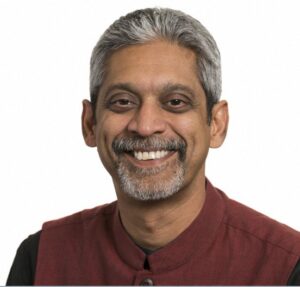 With the astronomical cost of healthcare in rich countries (and especially the United States) only rising, considering community-based approaches to mental healthcare should be common sense. Dr. Patel states that even in “developed” countries, we face a shortage of specialized professionals working in mental health, so we should prioritize “bridging the gulf between the knowledge we have that can transform lives…and how we actually use that knowledge in the everyday world.” From psychotherapy to identifying and treating early-stage pneumonia, community empowerment initiatives, like the one Dr. Patel advocates, have been found to be very effective at expanding healthcare in under-resourced communities.

While we certainly need action on behalf of mental health at the state and federal policy levels, we must continue to consider what roles our everyday institutions can play in supporting mental health. All of the examples provided above show us that, on a mass scale, our political, medical, and municipal institutions have so often treated mental health as a problem to be contained rather than as a site for providing integrated care. In order for us to collectively assume responsibility for our wellbeing, we must continue to confront the ways in which our institutions and society have failed to care for our population’s mental health, so that we can work strategically toward a future where the abundance of spaces dedicated to practical mental health care and knowledge-sharing is a point of pride, and utterly normal. 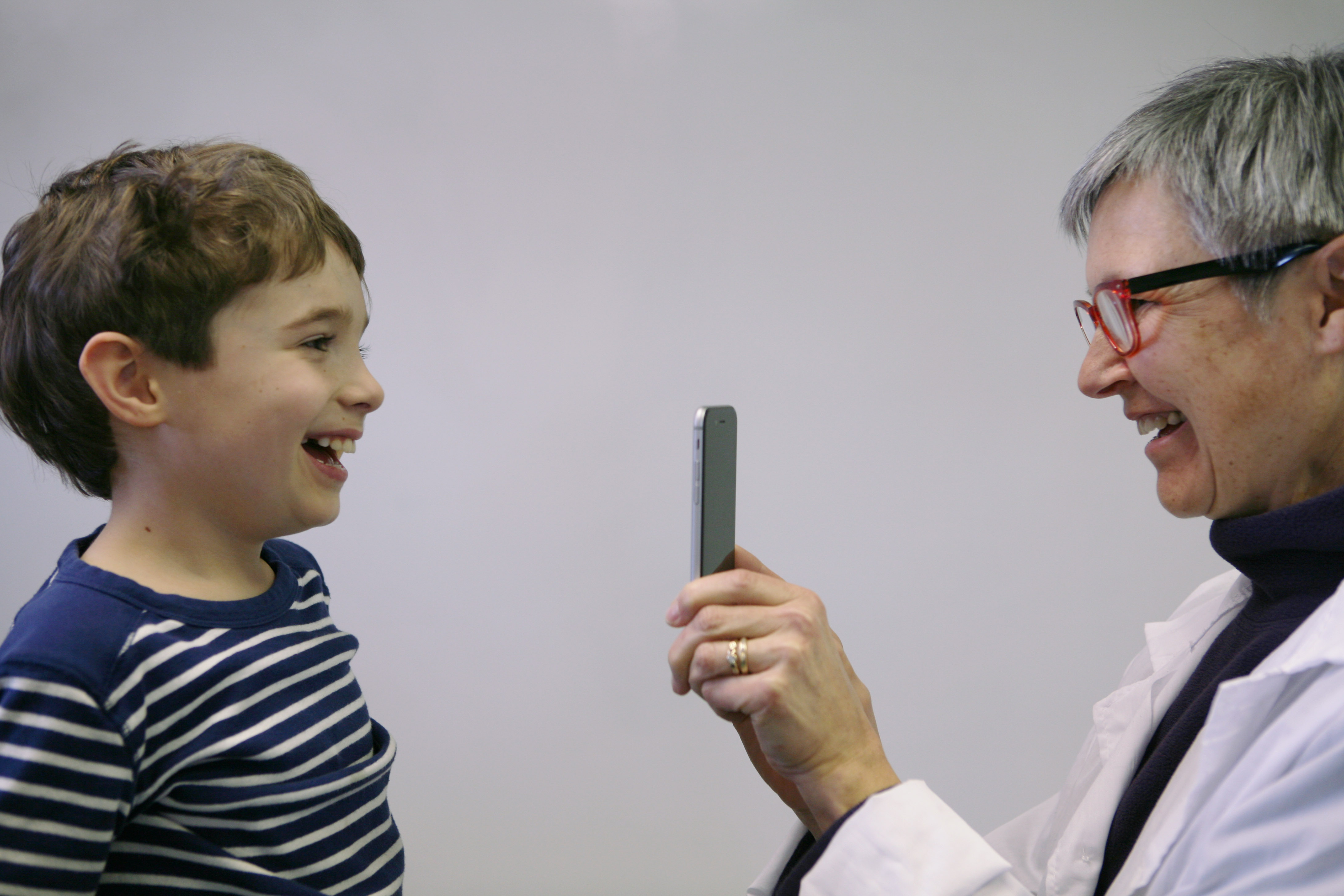 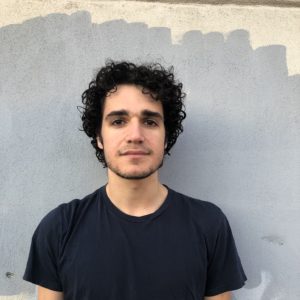 Dan is a Brooklyn-based writer, musician, and researcher. He received his B.A. in cultural anthropology from Wesleyan University in 2017, with a focus on development studies and experimental ethnography. He has since worked for cultural and political organizations across New York City such as Van Alen Institute, New York Civil Liberties Union, and Jamaica Center for Arts and Learning.